When mould gets into your air conditioner, it will go into circulation around your home. And this is not the type of mould that you find in an aged Danish cheese! This is the type of mould that can cause illness and allergies. So it’s important to deal with it swiftly. But how? Well, you have a lot of options so don’t panic! Simply have a read through some of our tips for how to get rid of mould in air conditioning – with them at your disposal, you can’t fail!

Think about what causes mould in air conditioning: moisture!

To work out how to fight mould in air conditioning systems, it’s useful to know why it’s there. Fortunately, this is not hard! All sites of mould growth are likely to share one thing in common: moisture. Moisture is the basic building block of mould. Without moisture, mould simply cannot thrive. And where better to find moisture than in an air conditioning system? Your air conditioner is full of moisture and airborne mould spores. That is largely unavoidable too, as the operation of your air conditioner involves the circulation of air from outside your home. It also involves the condensation and evaporation of moisture. So, inevitably, the airborne spores and moisture combine. The result: mould! But if this is unavoidable, how can you fix the mould? Read on to find out!

A weekly wipe-down will reduce mould in air conditioning systems

The first and most simple step to reducing mould in air conditioning systems is keeping them clean. If you clean your air conditioner to the best of your ability, the nasty bacteria and mould spores will be kept at bay. For example, if you clear the dust and cobwebs away from the exterior of your air conditioning unit, they are less likely to be sucked through the system. A large proportion of the mould spores that circulate through your air conditioner come from the surfaces directly surrounding its intake. By cleaning these surfaces frequently, you are placing yourself in a strong position to defeat the mould! Try using a light ant-mould solution well. Something like clove oil mixed with some warm water is always an effective option. Better still – it smells great!

The best thing you can do is to make sure the filter is working at its best. To do this, you should aim to keep the filter as clean and free as possible. If it collects too much dust, then small spores are likely to be forced through. Worse still, the air conditioner will be starved of air. As a result of that, it will operate at higher temperatures and use more power. So a clean filter not only weeds out the mould spores but also helps your air conditioner work efficiently. What a win!

Now you have a weekly routine that will help you prevent mould in air conditioning systems. But mould is persistent, so you need to be on your toes! The best way to identify the mould that has slipped through your net is by looking at the air conditioner ducts in your home. Any mould that has made itself at home in your air conditioner will show up on the ducts.

Because it is such a persistent little fungus, mould will cling to any surface it can. The first surface it is likely to come across as it is expelled from your air conditioner is that of the duct. So keep an eye out! The first sign of mould is some discolouration. It might just look like a smudge of dirt, but if it is left unchecked it will take over! If you see mould gathering on your ducts, it might be time to take the next step. This is your most powerful drawcard in the fight against mould, and we have listed it below!

Call in the professionals: mould in air conditioning systems is often a job for the experts

As they go to the heart of your air conditioner, they will be able to identify any issues that might have exacerbated your mould problem. When they find them, they will be able to fix them! Whether it is a new filter or an unblocked drain, they will notice it in no time. Air conditioners are complex appliances, so don’t be afraid to get some professional help. And remember, the longer the mould is left to roam free the worse it will get – so act fast!

Gallery image with caption: Why Is My Room So Hot Compared To The Rest Of The House?

Gallery image with caption: How Does Ducted Air Conditioning Work? 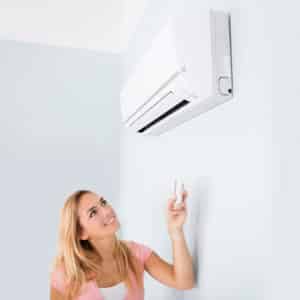